I do everything right.  I do everything imaginable to feel great, at all times.  I get sleep.  I eat great.  I drink water.  I limit sodium.  I pray in the morning and throughout the day.  I read.  I put my phone down (not as much as I used to, but hey … it’s 2021).  I follow guidance from the people I seek it: spiritually, mentally, physically.  I talk to others about themselves every single day and try to be of service in some magnitude.  I show up at work and I show up personally.  Seriously.  I do everything fucking imaginable to have the rules not apply to me.

The rules still apply to me.  Lately, I’ve been super obsessive with numbers.  First, it was the scale.  I worked too hard this summer to lose what I gained/lost, and my fear is that it’s going.  And it’s not.  It’s all in my head.  I have the pictures and same-fitting clothes to prove it.  Then it was my schedule.  And at any given moment, it can still be my schedule.  I appreciate discipline and productivity and thus it is required of me to look ahead, plan it out and execute.  Or else it won’t all get done.  And I have a lot to get done.

Today, it’s my own personal numbers in the gym.  Again, I “do” everything right.  I do exactly what my trainer tells me to do, every day.  I rest when she says rest.  I walk when she says walk.  I do my mobility routine when she says do your mobility routine.  I follow the program, because why pay someone to tell you what to do and then not do it?

I came to the realization recently that as a lifelong competitor, temporarily having competition taken away from me has given me a chance to scrutinize things (like my weight) in a way that intellectually I know is unjustified.  Not having an external goal to chase down with a date and a trophy attached to it has left me feeling kind of lost.  Not complacent but lost.  I’ve never not had something to pursue on the calendar, or some reason to be doing what I’m doing besides just wanting to do it for myself.  Ever.

First it was horses – for most of my life.  Then it was bodybuilding.  Then it was obstacle course racing and running.  Then it was my broken leg and rehab.  Then it was trying to run again.  Then it was fat loss.  And for the last 3-4 months, it’s just been me and the gym and my program and that’s it.  I suppose I could and should include publishing a book in there, maintaining my blog, rising to meet my professional goals and succeeding in my career, but for some reason I let those things go fairly easily.  My job is my job and affords me my lifestyle.  I have a written business plan with highlighted metrics to track and everyday log what I do to stay accountable.  My book is out there, and I post daily on social media platforms to build traction.  My blog – we’re here.

But shit with my body?  It’s just different.  This morning we tested my bench again with a different rep range, my back squat and single leg hip thrust.  I had numbers in my head last night for what I thought was reasonable to pursue, and I crushed 2 out of 3.  Completely.  But because 1 lagged and seems to be regressing over time, I’m in my head and haven’t left since 8 am.  I’m comparing myself to … anyone else, and not me.  Not the girl who broke her leg and had to rebuild from scratch.  Not the girl who could never really squat to depth but can like a boss now.  Not the girl who didn’t squat with weight on her back at all for the last few years because she was pursuing different things.  Not the girl who is more than a body and more than some metrics and more than a training program.  Not the girl who is learning she can do things just because she wants to, not because she has a date on the calendar.  No, not that girl.  Some other girl my disease thinks I should be mirrored against and compared to, some girl that doesn’t even know me.

Every day I do what I’m supposed to do, and I’m still affected by my emotions and sometimes self-inflicted trials.  What I want to focus on is not doing, but just being.  And when you can’t seem to get off of your own hamster wheel you built that no one else can even see, it’s really trying.  And I don’t want it to be trying.  I want it to be easy.  I’ve been doing this for nearly half my life already!  Why isn’t it easier?  And not to say it’s too hard or not worth it, just to say that no one told me I wouldn’t ever be affected again.  The only thing they promised me was that I wouldn’t hurt from alcohol, drugs or food again – not being human and experiencing feelings and emotions and thoughts.

And, that’s all they really are: thoughts.  My brain can yap all day long about squatting heavier and benching better, but in all reality, it doesn’t matter.  It’s just seeking a way out and a means to protect me from feeling.  And if I think enough, it seems logical that maybe that would occur.  Only because our thoughts are attached to emotions (mine are anyway), it never works out that seamlessly.  I just get fucking nuts.

And so, dear reader, there you are.  For today, I am just a little bit nuts.  At least I know it now, and I know it’ll pass very soon. 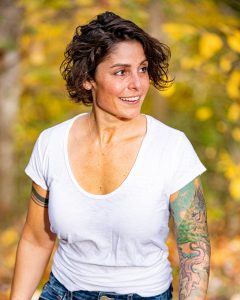